Home   Holguín news   Cuba: One party, that of Fidel Castro’s

Cuba: One party, that of Fidel Castro’s 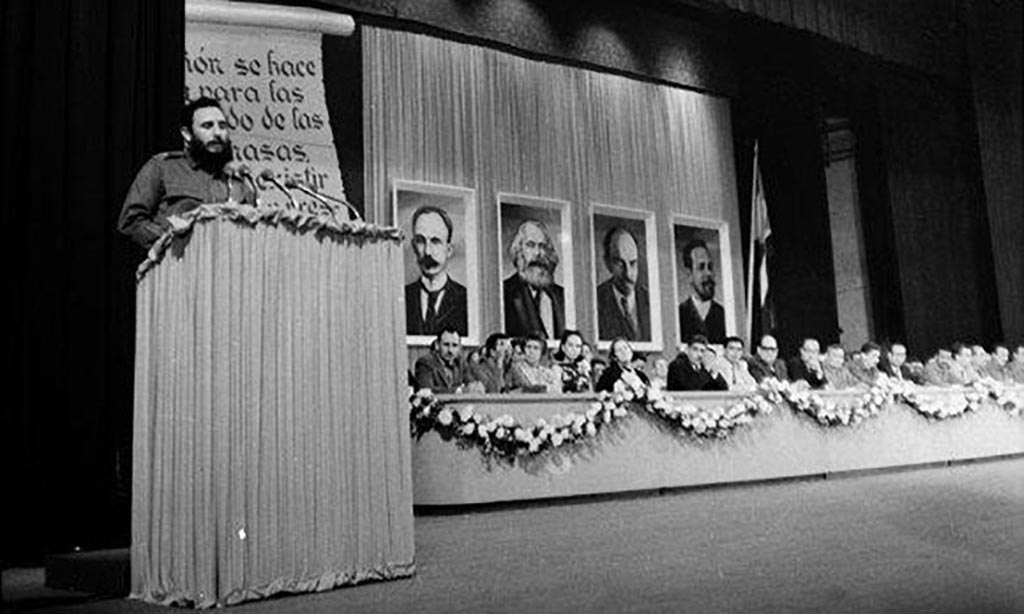 In a process not exempt from tension and disagreement, the three revolutionary groups that contributed to defeating the dictatorship worked to establish unity, with Fidel’s leadership and political pedagogy, culminating in the announcement of the Communist Party of Cuba Central Committee, October 3, 1965…I have the profound conviction that the existence of a party is, and must be, the form of political organization of our society, over a lengthy historical period, that no one can predict how long - Fidel Castro.

Ex-CIA agent Philip Agee stated, in March of 1987, in an interview with Ground Zero magazine, quoted by Alfredo Grimaldos on page 150 of his 2006 book La CIA en España, published in Cuba in 2007: "Within the Democracy Program, developed by the Agency, special attention is given to the foundations of the German political parties, mainly the Friedrich Ebert, of the Social Democratic Party, and the Konrad Adenauer Stiftung, of the Christian Democrats. These foundations had been established by German parties in the 1950s and were used to channel CIA money to these organizations as part of ‘democracy building’ operations after World War II.

“Later, in the 1960s, German foundations began to support sister parties and other organizations abroad and created new channels for CIA money. By 1980, German foundations had programs running in some 60 countries and were spending some $150 million. They operate in almost total secrecy... The operations of the Friedrich Ebert, of the SPD, fascinate the Americans, especially their training programs and the subsidies they gave to Social Democrats in Greece, Spain and Portugal, shortly before the fall of the dictatorships in those countries and immediately afterward...

“In Portugal, for example, when the Salazar regime, which had lasted 50 years, was overthrown in 1974, the entire Socialist Party barely has enough members for a poker game and was located in Paris, with no followers in Portugal. But with more than $10 million from the Ebert Stiftung, and some other remittances from the CIA, the Portuguese Socialist Party grew rapidly and soon became the ruling party.”

One would imagine that the end of a dictatorship should not be followed by this type of shell game that allows the same powerful ruling forces inside and outside the social and national sphere (Fidel dixit), organized in electoral parties, to continue the same domination by other means, as has happened not only in the Southern European countries mentioned by Agee, but in the model "transitions" of Chile and other Latin American countries where this has occurred, After assassinating a sufficient number of leftists, the conditions were created to ensure that a project of true popular democracy would never again take government power. If this should occur and attempts were made to reform the system without breaking what Lenin called "the machine of the bourgeois state," bankers, the corporate media and the judicial apparatus could put things in "their place," as has happened in Brazil, Ecuador and Paraguay. Plus, as in Honduras and Bolivia, at the ready are the army and the police with U.S. trained officers, as well as more than a few judges and journalists, leaders of the now-widespread Latin American lawfare battle, disqualifying politicians and parties whose only crime is to have a chance of winning elections. In Greece, the cradle of Western democracy and culture, the popular vote meant nothing to the banks when they imposed a plan dictated by the European Union, totally contrary to the national will expressed by citizens at the ballot box.

From North to South and East to West, electoral results are respected only as long the continuity of capitalism is not endangered, otherwise, financial coercion, economic sanctions and coups take charge of the correction.

The much talked-about first circus performance by the two candidates for the U.S. Presidency presented by the parties that control politics in that society - always in agreement on the essentials, whether it be the preservation of capitalism or the need to change Cuba - was nothing more than part of the show with which the negotiation of disagreements between powerful economic groups is sold as democracy. For all to see are the emails leaked by Wikileaks in which Michael Froman, a senior executive at Citibank, "proposes" those who would eventually occupy every Cabinet position in the first Obama administration, making clear exactly how things work. It is not Trump's party, but rather Biden's, which has twice rejected a program like that of Bernie Sanders, proposing a capitalism more attuned to social concerns. Imagining that Sanders had been nominated and won, and remembering what happened in Greece, what real capacity would he have had to govern?

The Cuban Revolution did not ban the pre-existing political parties because of their alliance with the Batista regime or their complicity with imperialist aggression. In the first months of 1959, they lost all popular support and most of their leaders left the country, to wait for the United States to return them. In a process not exempt from tension and disagreement, the three revolutionary groups that contributed to defeating the dictatorship worked to establish unity, with Fidel’s leadership and political pedagogy, culminating in the announcement of the Communist Party of Cuba Central Committee, October 3, 1965.

Fifty-five years later, we still have a Party in Cuba not run by bankers, with a membership that does not include journalists, military men or judges trained to serve foreign interests. Most of its members, including a good number of the men and women who lead it, were born after 1959 and were recognized and approved for membership by an assembly of workers in their workplaces, schools or military units, where they were considered exemplary. It is true that, over the years, there have been opportunists and pretenders in its ranks, but it is the loyalty, sacrifice and discipline of the immense majority of its membership that has made it possible for more than 86% of Cubans to approve a Constitution that recognizes the Communist Party of Cuba as the "organized vanguard” of the nation.

These are the people we have seen these days leading the search for the solutions with which Cuba has astonished the world, abandoning no one to their fate to face a hurricane or a pandemic.

They are members of a Party that gives every citizen a voice in debates on the future of the country, as made evident during the nationwide discussions, (and amendment) of Policy Guidelines for the indispensable transformation of our economy to achieve greater efficiency and the sustainability of our socialism, and the new Constitution. When did liberal democracies ever do such a thing?

Deeply rooted political culture, permanent contact with social reality and the capacity for mobilization and ideological production, with de-bureaucratized communication, are the demands of a society that is increasingly diverse and complex, in which what President Díaz-Canel has called an annexationist horde, financed by the United States, seeks to articulate a political project that, with the combination of economic blockade and promotion of an oppositional civil society, through a coordinated system of private media, seeks to restore capitalism in the country. The foundations denounced by Agee are ready to take advantage of our fissures and have dedicated their efforts in Cuba to events financed by organizations such as George Soros' Open Society Foundation. Offered during these affairs is their "experience in transitions," promoting the pattern seen in Eastern Europe, where more than a few regimes that have returned to liberal democracy and multiparty politics have imposed bans on Communist parties and symbols.

But once again, what is decisive is not what our enemies do, but what we ourselves are capable of doing. Army General Raúl Castro has succinctly described the Party we are building, one that is increasingly democratic; one that, under new circumstances, continues to guarantee the political power of workers; a forger of the people’s unity around the principles of social justice, national sovereignty and internationalist solidarity in which Fidel educated us. Nothing less would adequately reflect the standards of the Party’s founders, the membership’s commitment to the ethics of Martí and Fidel, or the heroism of the people with which it has nourished its ranks. / By Iroel Sanchez - Granma.

© Provincial Assembly of Popular Power in Holguin | Developed by Desoft